Not a few times in our lives we are going to see how similar things, even almost identical, are judged with double-mindedness: people, situations, attitudes, etc.
I am concerned that some people are attributed a certain image in the world, and if everyone is silent, no one objects, no one fights, no one tries to change the perception of them, to educate, to explain, those people in time will be condemned to go into society with a stigma crueler than they have today. Yes, often silence is golden, you pretend that it’s raining outside, pretending to be Zen is preferable, but sometimes it’s really the opposite because silence can perpetuate something wrong to infinity. And today it’s one wrong thing, two things tomorrow, it will be three after tomorrow, and later all of them.
But maybe one of the most charming stories but full of wisdom I read is about frogs, and no, not the one with the prince … Here is the story:
“How can you talk about the ocean with a frog that lives in a well?
A frog lived in a well all its life. One day it was surprised to find another frog.
– Where did you come from? It asked the newly arrived guest.
– From the sea. That’s where I live.
– How’s the sea? Is it as big as my fountain?
The other frog began to laugh:
– There’s no comparison.
The host frog pretended to be interested in the stories of the newcomer, but in its mind, it thought: “Of all the liars I have met in my life, this is definitely the biggest and the rudest one.” 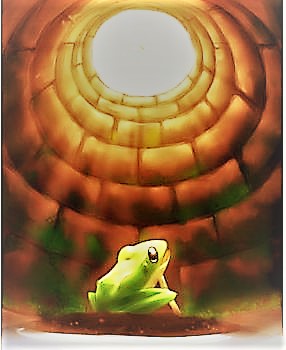 Fortunate are those who have the luxury of always being relaxed in some chapters of life. I honestly envy those who can do that. Of course, the fancy walls in which they live protect them from questions they have no arguments for, but those thick walls that keep them safe are directly proportional to the size of their own ignorance …
No one is born knowing everything, but no one has an excuse to die ignorant ( Except if you were born with a cognitive handicap.)!
Ignorance is not a blessing (even if this is what the Pope in Rome said), ignorance kills!

“We think too small. Like the frog at the bottom of the well. He thinks the sky is only as big as the top of the well. If he surfaced, he would have an entirely different view.”

Who looks outside dreams; who looks inside, awakes. -Carl Gustav Jung- View all posts by mydoina

Do you want to know who I am? As you can see, my name is Doina, I am a woman, a mother, a psychologist, a friend, a lover, a colleague, a neighbor, and sometimes all this together, it depends only on what time you are looking for me.
More about me?
I would say, let’s find out more about me, together ….. along the way!

Life through a porthole…

Who looks outside dreams; who looks inside, awakes. -Carl Gustav Jung-

Life through a porthole…